I was born in Winston-Salem, NC but grew up in in the eastern part of our state in Greenville. Growing up, my dad, who loved classical music, would play LPs on his mother’s old 78 RPM recordings of Enrico Caruso. Mom, while not a serious aficionado, always appreciated the music. My fraternal grandmother had been a lover of the Metropolitan Opera broadcasts sponsored by Texaco Oil Company. In the Great Depression, my grandmother enjoyed listening to the Met broadcast. Though she loved choral and classical solo music, she could not carry a tune in a bucket.

As a youngster, I would see my dad sing Baritone in the Church Choir, and I was permitted by our choir director to sing with the Sopranos. Dad had never learned to read music, nor did he play a musical instrument, but he instilled in me his own Mother’s love for the Church’s liturgy and for vocal music. I sang for several years in my pre-adolescence in a boys’ choir and in Middle School took voice lessons. On the morning or Christmas Eve, every year, we would listen to the broadcast of “Nine Lessons and Carols” transmitted by Public Radio and broadcast by the BBC from Cambridge. Having sung in a Boys Choir in Greenville, which met at ECU, I would imagine being the young chorister who is selected at the last minute to sing the first stanza of “Once in Royal David’s City” A cappella, before the Choir of Kings College processes down the Nave of the Kings College, Chapel.

I joined the Hickory Choral Society in 1997, the year the ensemble traveled to the United Kingdom. In 2015 I earned a PhD in Systematic Theology from the University of St. Michael’s College in the University of Toronto. In my master’s Thesis and in my doctoral dissertation, music and the role music has being transcendental of the beauty of God’s good creation is described in my narrative.

Mom and Dad always looked forward to traveling to Hickory for our concerts at Christmas. In the last several years they have been unable to hear our concerts live, but they have enjoyed the HCS recordings which I would gift to them. Mom’s health continues to decline, and Dad died on January 19, 2021. For me a lasting legacy to them is continuing to sing the kind of music for which the Hickory Choral Society is best known. The comradery and the sense of balance which an all-volunteer community chorus provides all of us who are singers is vital to remaining healthy.

Years ago, I served as Property Manager and after many years off the Board, I returned to the Board in July 2021. While we are not having our famed “Cookies and Carols Concert” as a part of this year’s Christmas Program we are committing to a repertoire which will have a broad appeal to people of all ages.

Under the baton of Dr. Ryan Luhrs, Conductor and Artistic Director of HCS, I am delighted that your Choral Society in Hickory will continue to offer music that touches the very inner parts of our being, heralding the beginning of the Christmas Season. 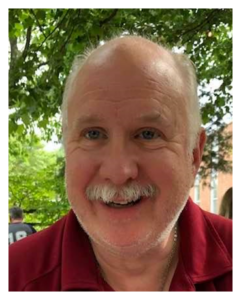