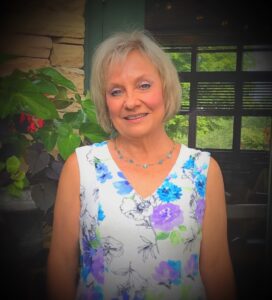 I grew up in New Jersey in a home where my father would sing while playing either the piano or guitar – both by ear since he could not read music. We didn’t have much growing up, but we did have music. My parents wanted my 2 older brothers, older sister & me to learn more about music. We were all given the opportunity to have music lessons. My siblings all showed more talent in playing a musical instrument than me. I wanted to sing. My parents agreed and encouraged me to join my elementary school chorus. I was thrilled to be singing with other voices and continued singing through high school, the highlight of which was being chosen to sing with the Select Choir my senior year.
After high school, I worked for a company that offered college tuition reimbursement. Working full time and a:ending night classes did not leave time for musical pursuits, that is until my senior year when I was able to join the college chorus. That experience increased my desire to be part of a choral group.
I was married shortly before my graduation from college. We both had busy work schedules that unfortunately left us both little time to pursue our interests. We decided on early retirement. We moved to Southport, NC where I joined the Sea Notes Choral Society. The highlight of being part of this group was the privilege of singing at the Citizen Naturalization Ceremony held each year in Southport.
After having lived on the coasts of both North Carolina and then Florida (all the while singing in church choirs), we decided to move back to North Carolina and looked towards the foothills instead of the coast. We found Hickory and were “sold” when we came upon the Salt Block. The Science Center and Art Museum offered something for my husband’s passions and the Choral Society for mine. In late summer of 2011, we started construction on our new home and moved into it early spring of 2012.
That same spring, my husband was diagnosed with cancer and sadly passed away the spring of 2013. I found myself in a new city knowing very few people as my family lived in New Jersey. A few months later, the Hickory Choral Society held auditions for new singers. My family encouraged me to audition – Bob would have wanted me to, they said. I auditioned and felt blessed to have been accepted that year. I continue to be awed by the talent of this group and feel honored to be a part of the HCS family.
I hold a BA degree in Business Administration and have served as Treasurer for HOA’s in both Florida and here in Hickory. I also served as Treasurer for the Hickory Art Museum Guild. I look forward to using my past experience to serve as Treasurer for the Choral Society AND to keep singing! – Linda DiCianni
Posted in Releases